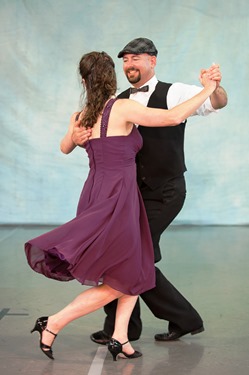 In 1914, a young dancer named Harry Fox introduced his version of the current jerky, trotting dances popular in that era, which soon became the hot new thing in New York.  When his dance made it to England, the jumps and high jinks were ironed out, creating a smooth, elegant dance more reminiscent of the Waltz.  The combination of quick and slow steps permitted more flexibly and gave more pleasure than the one-step versions it replaced   Foxtrot variations include the Peabody, Quickstep and Roseland.

The Foxtrot is an all-purpose dance that can be performed to many different styles of music. Overall the dance should have an easygoing, lighthearted feel with controlled gliding steps.  We usually feature this dance before the Redwood Coast Music Festival.